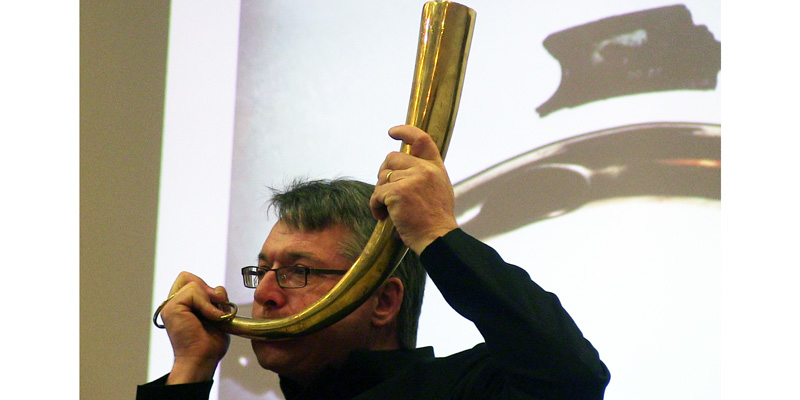 Antrim Adharc –  (horn). The first Bronze Age side-blown horn made in modernity, one of a pair from Drumabest, Co. Antrim, key of G, made in 1988.

In the Spring of 1988, having made contact with Dr. Peter Holmes of London, permission was granted to take latex moulds from a Bronze Age original horn and its trumpet pair known as the Drumabest pair at the Ulster Museum in Belfast. The moulds were brought to John Summerville, a London based sculptor. A wax was thrown of the side-blown horn (adharc) and a casting was made. At the time, to achieve this the wax was cut into three parts that were individually cast and the bronzes were then welded together. The trumpet pair to this instrument would be made a couple of months later.

In the meantime, O’Dwyer brought this bronze horn to Dingle, Co. Kerry in the South West of Ireland where he did the finishing work by sanding and fine polishing the bronze to a high shine. He began to experiment with the help of Fergus O’Flaherty of O’Flaherty’s Bar in Dingle by tooting along with the live traditional music sessions. This new horn was named ‘adharc’ and was played for the first time in modernity in a parade through Dingle accompanied the Junior Fyfe and Drum band. Since 1988, this side-blown ‘adharc’ has toured around the world. It has been performed as a solo instrument and accompanying many musical disciplines including ancient and traditional music, orchestral, classical, jazz and modern techno dance music. As the first reproduction of an Irish Bronze Age horn it continues to play an integral part in the ongoing story of Ancient Music Ireland.