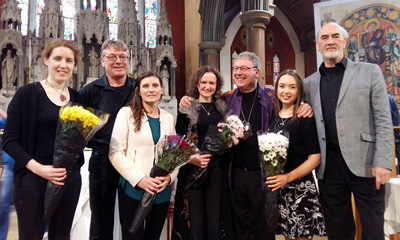 Composed by Simon O’Dwyer, Bréifne Holohan, Michael Holohan for the celebration of the 100 year anniversary of the 1916 Rising. Performed at the Augustine Church, Drogheda. April 20 2016.

This is a new composition for Trumpa Fáda (Iron Age trumpet),  strings, guitar and percussion. Performed as part of a Seán Ó Riada Mass in commemoration of the centenary of the beginning of the Irish rising, Easter Monday, 24th April 1916.  A few hundred volunteers in Dublin and Wexford faced up to the largest empire of all time in pursuit of freedom that was gained at last in 1921.   Performed at the Augustinian Church Drogheda.  Mass celebrated by Fr. David Crean.    Composition by Michael Holohan, Breifne Holohan, Grace Dillon and Simon O’Dwyer.

In the Spring of 2016, Simon O’Dwyer  was invited to play ancient instruments as part of a Mass arranged by Drogheda composer Michael Holohan celebrating 100 years to the day of the 1916 Rising in Ireland.  To this end they discussed composing a tune to be played on the trumpa fada (Iron Age trumpet)   They  wished to commemorate Eamonn Ceannt, one of the signatories of the Proclamation of Independence which was read out from the steps of the General Post Office in Dublin on Easter Monday April 24, 1916.  Ceannt was born in Co. Galway and lived in Co. Louth for part of his education where this Mass was to take place.  Most importantly Eamonn Ceannt was a musician, an accomplished uilleann piper.  Michael and Simon agreed to use a slow jig rhythm and the strings from the orchestra which was also featured in  the rest of the Mass.   The night before the event Simon O’Dwyer,  Michael Holohan  and his son Breifne Holohan  along with percussionist Grace Dillon composed the  final arrangement for the tune which included strings guitar and percussion.  Following a brief rehearsal with the orchestra on Sunday morning, ‘For Eamonn Ceannt’ was successfully performed during a moving ceremony.  The piece was conducted by Michael Holohan and presided over by Father David Crean.

It was particularly interesting that Ancient Music Ireland had been studying the most likely playing position of the trumpa fáda. Following detailed examination of the original Iron Age instrument and particularly the position of the wear on it, the only realistic arrangement decided on was that employed in the church.  A member of the St. John of Gods Ambulance named Liam held a long pole upright suspended by a chain around his shoulders.  The upper bell of the trumpa was positioned in a fork at the top of this pole facing forward whilst the mouthpiece end was held by the player standing directly behind.  This allowed for the full shining length of the instrument to be presented, paraded and played in a comfortable fashion while remaining vertically in the air.

The idea had originally been tested at the ANIMUSIC Congress Portugal in 2015 but the Mass at the Augustinian Church in Drogheda was the first public presentation in a performance setting in possibly two thousand years.  Thus, we can gain an insight into the power and majesty that was projected by the magnificent trumpas of Ireland and Britain around the time of Christ.  It is also remarkable that such an ancient design can be used to play utterly contemporary music with modern instruments today and be entirely in tune.