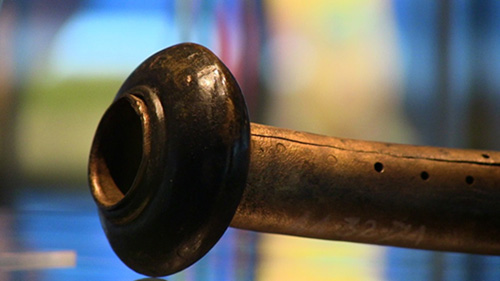 Roscrea, Ireland and Llyn Cerrig Bach, Wales – tubes – circa 150 BC

Roscrea fragment tube resides in the National Museum of Ireland. It is the most similar example to the Llyn Cerrig Bach fragment tube but with a knop at each end. In each case the tube is cylindrical with a wide bore of 26-28mm. The Roscrea is slightly wider. Also the two knops on the Roscrea and one on the Llyn Cerrig Bach are all cast in Bronze and are very similar in shape.

Llyn Cerrig Bach tube and knop, original, circa 150 BC. ©National Museum Wales. It is possible that the Llynn Cerrig Bach may be a surviving approximate half of an original which had a knop at each end. This would make it almost identical to the Roscrea example. Because the ‘Roscrea’ has a knop at each end, we may deduce that there were at least two other parts to the original instrument. If we suggest that a conical bell was attached at one end and a cylindrical tube of similar diameter to the centre tube with a mouthpiece at the other end, it is possible to present a complete instrument. If all three parts follow the curve of the surviving centre tube, the result may be a semi-circle with an overall length of approximately 2.2 meters.