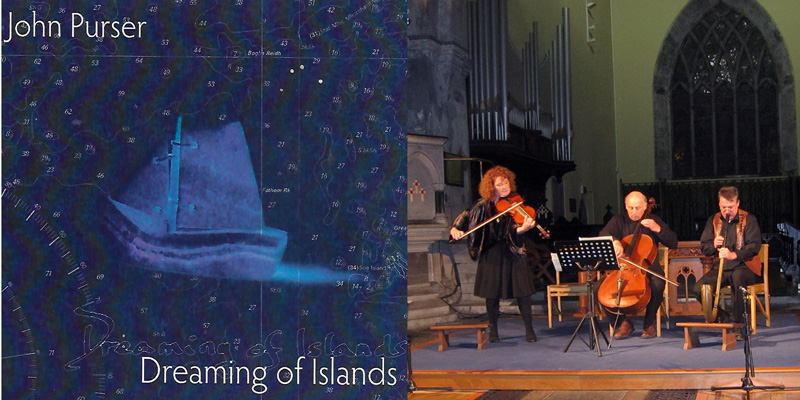 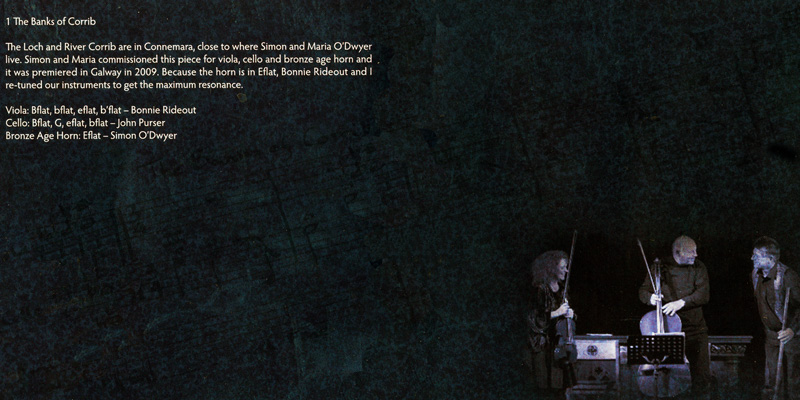 ‘The Banks of Corrib’ holds the proud position of track one on this record by John Purser. The piece commissioned by Ancient Music Ireland and composed by John Purser features viola played by Bonnie Rideout, cello played by John Purser and dord íseal (bass Bronze Age trumpet) played by Simon O’Dwyer. The journey of exploring instrumental overtone on the Bronze Age bass trumpets and more contemporary classical instruments began in 2008. Following an invitation to play instrumental overtone and harmonic singing backing for a piece entitled ‘MacDougail’s Gathering’ on Bonnie Rideout’s album ‘Scotland’s Fiddle Piobaireachd vol 1, Ancient Music Ireland were inspired! It was decided to release an album highlighting a collection of previously recorded pieces featuring the phenomena of instrumental overtone. This new sound was brought to life through the bronze horns and trumpets of Ireland and occurred naturally in many of the pieces already recorded.

In 2009, John Purser composed ‘The Banks of Corrib’ specifically featuring the instrumental overtone and harmonics of the bass bronze trumpet.

‘The Banks of Corrib’ premiered to great acclaim at the ‘Overtone – Live Acoustic’ concert, performed by the trio of Bonnie Rideout, Viola, John Purser ‘cello and Simon O’Dwyer dord íseal (bass bronze trumpet). The event took place in the magnificent acoustic space of St. Nicholas’s Collegiate Church in Galway City, Ireland in November 2009. It was also the evening the album ‘Overtone – Ancient Music of Ireland’ was launched. The concert, using no amplification featured a range of ancient and more contemporary musical instruments and was performed to establish if instrumental overtone could make a real contribution to a live performance. As the concert was recorded by Rod Callan of Penylan Studios, the subsequent record ‘Overtone – Live Acoustic’ was released in 2010. (both albums are available from Ancient Music Ireland’s catalogue of music).

This album and many other wonderful recordings can be purchased directly from www.johnpurser.net

Below is a sample from the track –  ‘The Banks of Corrib’.

The Loch and River Corrib are in Connemara, close to where Simon and Maria O’Dwyer live. Simon and Maria commissioned this piece for viola, cello and Bronze Age trumpet and it was premiered in Galway in 2009. Because the trumpet is in eflat, Bonnie Rideout and I re-tuned our instruments to get the maximum resonance.