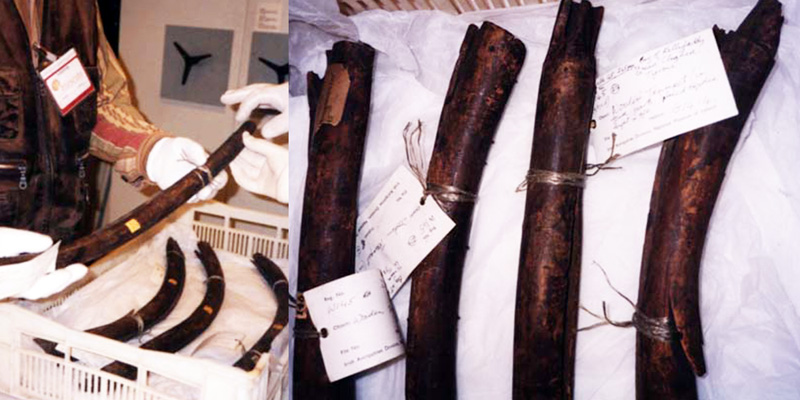 Dated at 2,340 BP, the Killyfaddy four are a group of four wooden tubes which were recovered together from bog land in Killyfaddy, Co. Tyrone in the early 19th century AD. Each tube or pipe was fashioned from two halves of a solid curved cylinder shape of wood which had been split along its length.

A semi circular channel was carved into the inside of each half so that when the two were brought together a cylindrical internal bore was achieved. Three of the tubes are similar in length, 72 cm in width, external 4 cm and cylindrical internal bore of 22mm. At one end of each, the external wood has been carved into a gradually narrowing cone, while at the other end they have been widened on the inside. The fourth however, differs in that it is shorter than the others, its overall length being 67cm and there is an odd carving at one end. Rather than a widening on the inside, a definite looking ‘male’ fitting has been cut with a sharp raised shoulder arrangement that appears to have been specifically designed to accommodate an extension of some kind.

All four tubes have approximately the same diameter along their internal bore though three of them bear evidence of fine sanding or smoothing work on the inside surface while clear chisel marks can be seen on the fourth. Each of the Killyfaddy four tubes has a number of metal pins (probably bronze) tacked into the wood along either side of the split lines. There are also tiny holes which probably indicate where pins may have been. In 2002 the tubes were formally identified as being fashioned from yew by Dr. Ingelise Stuitz and their age established with carbon dating at 2340BP + or – 30.