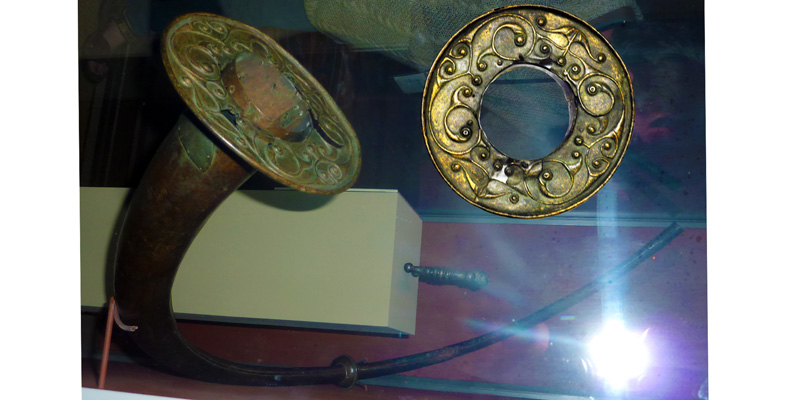 A sheet bronze trumpet from Emain Macha (awin maka), Co. Armagh. This is the most famous of the great marching trumpas of Celtic Ireland. Currently kept at the National Museum of Ireland it is the only presently know survivor of a group of four that were found during drainage work at Loughnashade (lake of the treasures) beside the Iron Age stronghold of Emain Macha in 1794. An unsubstantiated report stated that one of the four was given to a Captain Campbell. A second was sold, the third went missing and the remaining survivor was brought to Dublin. It is also recorded that a further two examples of these trumpets were found at Bushmills, Co. Antrim in the early nineteenth century and subsequently disappeared.

The conical bell of the instrument is in good condition being finely finished with a distinctive circular decorated plate (now detached) at the end. The remaining cylindrical tube is, however, very rough by comparison. It would appear that the two halves may have in fact been parts of different instruments. The overall length is just over 2 meters but because the metal thickness is 0.5mm or less the instrument weighs no more than 1 kilo. Though the instrument is at present displayed in the National Museum of Ireland in a ‘C’ curved shape, it is now thought that originally these trumpets were assembled in an ‘S’ format and played and paraded vertically over the musician’s head with the decorated plate facing forward.

The first reproduction has been found to play a good harmonic series from an E flat fundamental. An interesting feature is that by using a certain pressure, a powerful (shockwave) tone can be generated which is further amplified and projected by the circular plate creating a blast of powerful sound which is very out of proportion to the size of the tube. Such a technique would have been very valuable to trumpet players leading an advancing army into battle.