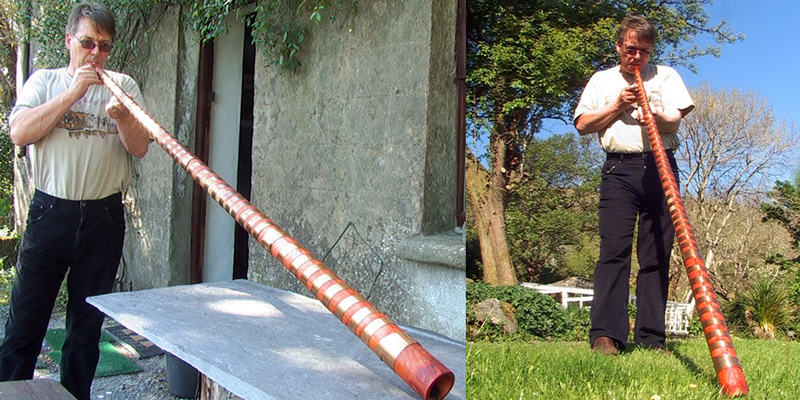 The mayophone is an accurate reproduction of the original Bekan horn named from the Bekan Bog, Co. Mayo, Ireland where it was found in 1792. The Bekan horn is unique in that it is designed as a long conical tube which has no finger holes and is restricted to a narrow aperture at the playing end. Whilst appearing to belong to the lip reed horn family, a separate reed was required to sound it. The length is carved from yew wood and wrapped in a decorative spiral of bronze ribbon. With the view to make a new instrument, Simon O’Dwyer approached Rod Cameron, renowned expert in Baroque flutes and dulcians to examine and measure the original instrument in the crypt of the National Museum of Ireland, Dublin. Following a two year search, a suitable length of yew wood was sourced from the Heritage Council who were doing tree surgery and trimming small branches from the ancient yew trees in Cong Abbey, Co. Mayo.

The mayophone was fashioned in the original way by splitting a straight length of wood, hand carving each half and then gluing them together. Decorative bronze ribbon was fitted using copper staples. A beating reed from the closest modern relative, a bassoon was fitted by Michael Jones who was no. 1 bassoon player of the National Symphony Orchestra in Ireland. He succeeded in playing a number of related tuned notes which are accurate enough to allow the mayophone to be played with today’s music and instruments.