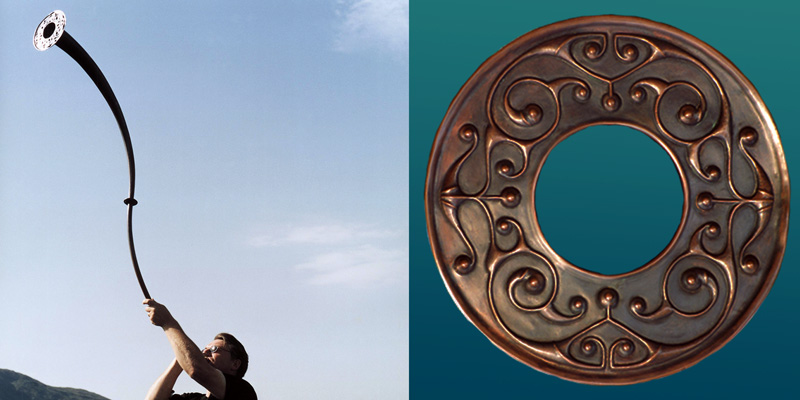 During the years from 1994 to 1996 a number of reproductions of a Scottish Carnyx were successfully made by master silver smith John Creed of Glasgow, Scotland. Following this he was approached by Simon O’Dwyer to examine and measure the Iron Age ‘Loughnashade’ trumpet which was on display in the National Museum of Ireland in Dublin. This complete instrument had been found along with three others in 1798 in the Lake of the Treasures at Emhain Macha near the Navan Fort, Co. Armagh, Northern Ireland. In January 1998 the new copy was completed. It was then collected by O’Dwyer from John Creed at Prestwich Airport on the day of a blue moon and brought home to Ireland. The first recordings were made in the Works Studio, Dublin by Rod Callan and may be heard on the album ‘Overtone’. Link In the intervening years it has served as a powerful example of the metal working excellence and musical craft achieved by those who played them for the first time more than two thousand years ago.

Second new Iron Age Loughnashade trumpet made in Modernity, name given to new reproduction ‘Trumpa Créda’ (metal from the earth as Gaeilge, key of E-flat.

After studying the long curved horns of India and Nepal which are used in modernity as part of a musical ceremonial tradition, it was a natural step for Ancient Music Ireland to travel to these countries in 2001 to explore possible similarities between these instruments and the Irish and British Iron Age trumpets. The first focus of the trip was to present a week of lectures at the Music Department in the University of Kathmandu, Nepal. The second was to meet makers and players of the horns being played in their living tradition. Visits were made to Gurka and Pokara were both musicians and makers were found. The horns named Narsingra were seen and heard being played. Whilst the horns appeared very like the Irish Iron Age examples, they were fundamentally different in that the design was conical along the entire length with a choked mouthpiece. This meant that only high notes were played as part of a band of musicians and dancers. Thus, it was clear that the sounds were very different from the part conical/part cylindrical Irish examples. It was very interesting to note that a player in Gurka who gave a demonstration was using circular breathing to make the sounds continuous. Whilst staying in Bhakatpur, Nepal, Ancient Music Ireland were introduced to a musical instrument maker who agreed to use his skills to make a copy of the Irish Iron Age ‘trumpa créda’ from Loughnashade from drawings brought from Ireland. This instrument was completed in 2012 and became a pair with the one made by John Creed in Glasgow in 1989. This follows in the traditions of Nepal where two semi circular instruments together make a full circle representing the two partners in a wedding coming together to make one. This practice raised the possibility that pairs of ‘trumpa créda’ may have been used in a similar fashion. It is interesting that the Loughnashade trumpet was recovered along with another three instruments that are now missing. Thus, all four could have been deposited as two pairs.