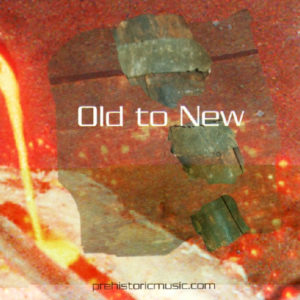 A collection of four studio tunes and four live recordings. Old to New was put together following a very successful visit by Ancient Music Ireland to perform at the Sound Symposium in St. John’s, New Foundland. Simon O’Dwyer, Phil Conyngham and Maria Cullen O’Dwyer with guest musician John Purser performed for the opening night of the ‘Sound Symposium’ in July 2002.

Ancient Music Ireland has studied many surviving old music traditions. For this track, five Irish and English bronze horns were brought together each playing different sections in a rhythmic pattern to make up a single tune. The idea was influenced by recordings of Ugandan Court musicians playing side blown animal horns in 1950AD. The combination, achieved through over-tracking, works very well and may indicate one of the ways in which these horns could have been played in their own time.

Early in 2002 following the successful reproduction of the mayophone, a tune was composed to capture its essentially new sound. The relaxed rhythm is created by hand playing on a bodhrán and crotal. Intermittent adharc is added and the mayophone takes a wild jazzy lead. This sound combined suggested elephants sounding off. Much credit is due to Rod Callan whose great ear and expertise made it happen.

This is a more formal version of the tune which was originally composed in 1998. (see 01A – Ar Aghaigh – version 1). It is difficult today to imagine what a large army led by loud powerful instruments and bent on destruction may have sounded like. In the Gallic wars, Roman scribes reported soldiers being addled and losing reason through the sheer volume of sound created by opposing French Celtic armies. Musical instruments were still being used for this purpose at the beginning of the First World War in 1914 when German soldiers reportedly retreated in the face of an advancing British force led by Scottish great Highland pipers. Fortunately over-tracking technology allows for the creation of at least a flavour of what the real thing may have been like.

One of the famous legends of ancient Celtic Ireland is ‘The Tain bo Froech’, (taw-in-bow-fraay-ock). The story describes a visit by a young noble to the Kingdom of Queen Medb (Meave) of Connaught at Cruachan in Co. Roscommon, Ireland. He has been invited by the Princess/Heiress Findabair (fin-a-var) who has heard of his reputation for being handsome and brave. When Findabair falls in love with him, the Queen fearing an uprising from local Kings who might be expecting their sons to be matched in marriage with the Princess plots with her consort Aillil to murder him. Following a failed attempt in which Froech is badly wounded, the Queen expresses remorse and arranges that the noble man is brought to the palace in a procession as part of a healing ceremony. Seven horn players who had accompanied him on his journey across Ireland to Cruachan join the procession and play a healing tune which is so beautiful that upon hearing it 30 of Queen Medb’s courtiers die of happiness. The story was written down in the 8th Century AD from an oral version and is believed to refer to a time around the middle of the 1st Century BC. In ‘The Healing of Froech’ a trumpa fada is over tracked 7 times. The result is a strangely powerful, colourful and overtone rich melange of sounds. When listened to at high volume, it is not hard to imagine the effect that such a sound could have in a ritual setting.

This impromptu (jazz) tune was composed and played by Reconciliation and guest musician John Purser to celebrate the opening of the Sound Symposium in St. John’s, Newfoundland in 2002. The tune begins with bodhrán, dord íseal and didgeridoo. These are joined by trumpa créda being played while walking through the audience from the back of the theatre.

In this unusual interpretation, John Purser sings a seal song. The song is in an unknown language (possibly old Norse), and is believed to be the oldest surviving in Scotland. Tradition says that it tells the story of a seal who had become a man or selky and was now going back to be a seal again. He sings as the seals on the shore call him back to the sea.

This remarkable set of two tunes begins with a powerful solo performance on a dord ard by Phil Conyngham. The lively driving rhythm and rapidly changing and multiple tones are drawn from his experiences as a master didgeridoo player in Australia. As ‘Solas Nua’ comes to its perfect end the dord ard is joined by two more dord ards, a dord íseal, an adharc and a crotal. The tune is a remembrance and celebration for Don Wherry. Don had initially founded the Sound Symposium with his wife Kathy and was largely responsible for its growth and success as a worldwide musical event. Reconciliation had met Don in 1994 but sadly he had died before the festival of 2002.

When Reconciliation and guest musician John Purser arrived in St. John’s Newfoundland in July 2002, they discovered that the band was being honoured by an invitation to headline the opening event of the Sound Symposium that same evening. Having had minimum rehearsal time and suffering from jet lag, it was decided to attempt a ‘mad’ impromptu tune for the last encore. The band had been in Galway City Ireland in July many times when Arts Week and Race Week combine to create a month of madness, mayhem and lunacy. People are attracted to the spectacle form around the World and the city goes completely bonkers. The tune gives a unique flavor of the ‘rocking round the clock’ party that is ‘Galway City in July’.

Note: Ancient Music Ireland would like to thank Kathy Wherry and all at the Sound Symposium, St. John’s, Newfoundland.