During recent centuries many horns and trumpets were found and then subsequently disappeared. We know that the great Loughnashade trumpet from Co. Armagh was recovered in company with another three similar instruments in 1794. One of these was possibly given to a Captain Campbell and may have been destroyed in a house fire in Argyllshire in the 1870s. There is no record of the other two. A further two trumpets similar to the Loughnashade were recovered in 1824 at Bushmills in Co. Antrim but subsequently disappeared. Other missing prehistoric instruments in Ireland include perhaps as many as twenty Bronze Age horns from around the country. In England a bronze horn was found in a well at Battle in Sussex in the early nineteenth century. It was brought to London, where a drawing was made and the horn then disappeared.

It is unlikely that any of the five Iron Age trumpets or twenty or more Bronze Age trumpets and horns were destroyed. They may be buried in storage in a small museum or are kept as trophies of a club or society. Perhaps a bronze trumpet or horn is hanging over a fire place and the owner believes it to be no more than one hundred years old!

There may be only a part of an instrument which might look like a simple length of curved tubing without meaning. While these artefacts will have little or no monetary value, they are immensely important for the amount they can add to our knowledge of prehistoric people and music. Any information regarding missing prehistoric instruments can be given to the National Museum of Ireland, The British Museum. The Ulster Museum, The Scottish Museum or to Prehistoric Music Ireland, where upon it will be immediately passed on to the relevant Museum. 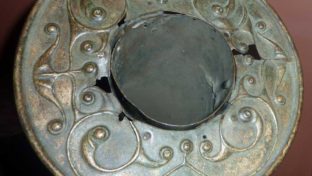 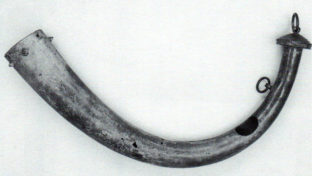