Crónán is best described as a form of vocalisation that was one of a number of singing types used in Ireland and Scotland. It is mentioned in legend as being employed by the Fianna or the mercenary army of Fionn mac Cumhaill some 2,000 years ago. They were able to create a droning sound called ‘dord’. 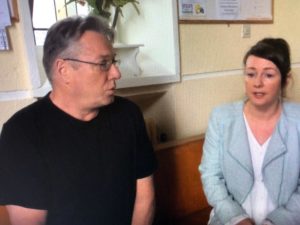 Another reference occurs in Irish writings from the 9th Century which include crónán as one of a number of vocal techniques that was performed both by soloists and congregations. In Scotland it is mentioned in the 17th Century and the most recent description was by O’Curry in the 19th Century. He referred to crónán as a vocal accompaniment to a melody singer: ‘A humming or droning similar in sound to the purring of a cat’. He also said it required a particular talent to perform which not very many people could do and that there may have been a connection with keening that was sung by women to lament the dead. The tradition is thought to have died out later in the 19th Century and is now forgotten.

As a young man Simon O’Dwyer of Ancient Music Ireland had discovered a means to call cattle. He would sing a loud drone through cupped hands to imitate the sound of a calf bawling. When he did this next to a field of cows, they would invariably all come running over to investigate. Whilst hill walking with Dr. John Purser in the Isle of Skye, O’Dwyer demonstrated this vocal drone sound to him. Dr. Purser became excited and described the sound as being similar to the droning that singers from Mongolia and Tuva use to create overtone melody. He encouraged O’Dwyer to practice this vocal droning technique.

Some years later whilst researching for his book ‘Ancient Music and Instruments from Ireland and Britain’, O’Dwyer found a mention of crónán that Dr. Purser had included in his publication. ‘Scotland’s Music’. It seemed the droning could well be compared with the purring of a cat. O’ Dwyer asked Caitriona Ni Cheannabhain, a traditional sean nós (meaning old style) singer from Connemara in the West of Ireland to accompany him with one of her repertoires. The origin of sean nós songs is not known, though scholars agree that it is probably the oldest vocal tradition in Ireland. A similar form is used by a congregation for religious ceremony in the Outer Hebrides of Scotland. The collaboration with Caitriona worked very well with the vocal drone fulfilling a role not unlike the drones that accompany the chanter on the uilleann pipes. A public performance took place by Ni Cheannabhain and O’Dwyer at the annual commemoration for her father the renowned sean-nós singer, Michael Mháire Ghabha from Carna. This experiment using the voice as a drone to accompany melody was received with great enthusiasm at the gathering of singers and musicians.

Whilst there can never be absolute certainty as to the actual nature of what crónán was, yet in light of the surviving descriptions and the musically sympathetic way that O’Dwyers droning enhances a song, it is possible that an ancient form of crónán as a type of singing has been rediscovered.

O’Curry, E. , Of Music and Musical Instruments in Ancient Eirinn,

Purser, J., ‘Scotland’s Music, A History of the Traditional and Classical Music of Scotland from Early Times to the Present Day’, Mainstream Publishing, 2007.