Two Stories in One 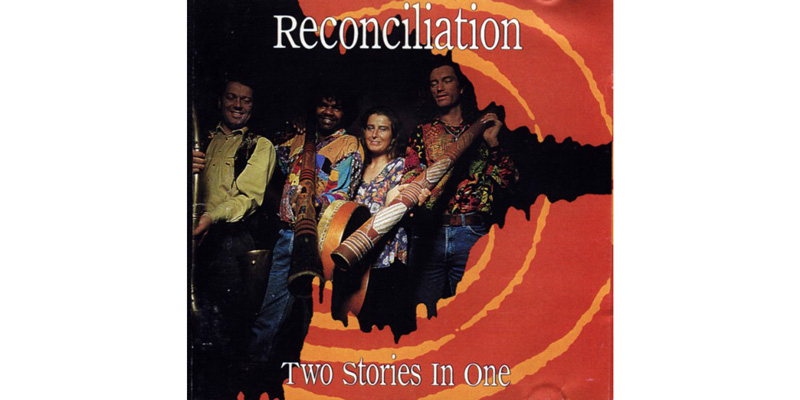 It is with heartfelt respect for the Aboriginal and Torres Strait Islander Peoples that we publish audio and visual of our late friend and band member Alan Dargin.

The recordings of ‘Two Stories in One’ and the accompanying origins of the band ‘Reconciliation’ are best described in the notes that were written for the CD booklet in Sydney Australia, 1992. It goes as follows: –

A wonderful convergence of musical talents, an amazing convergence of musical cultures; this is ‘Reconciliation’. In 1988 Simon O’Dwyer discovers that Bronze Age Irish horns can be played with the same techniques used to play the Aboriginal didgeridoo. He arranges to have casts made of the original instruments and starts playing them at traditional music gigs.

Four years on, Simon spends time in Arnhem Land deepening his knowledge of didgeridoo playing. Then, back in Dublin, in a pub (where else?), he comes across fellow musician Maria Cullen. Fascinated by the sounds the reconstructed horns produce, Maria sets up Ancient Music Ireland to make Ireland’s newly rediscovered ancient music more widely available. In January 1992 Maria and Simon set out on a six month tour of Australia and just three days after touch down, they have the good luck to run into ace didgeridoo player Alan Dargin (himself from Arnhem Land). They play together, they play each other’s instruments, and they discover a remarkable musical coincidence.

Alan introduces Maria and Simon to another outstanding exponent of the art of the didgeridoo, Phillip Conyngham, and the four begin to perform together. This is how Maria recalls those heady days: ‘The music that we began to create came about as we were busking together on Circular Quay in Sydney, I would play an Irish rhythm or reel time on the bodhrán (the Irish drum) and the other three would improvise, making the sound grow to an amazing crescendo. Or I would play a jig time – this is the rhythm that inspired the track Jiggery Didj. We would count out the jig time in our heads and take it from there, using clap sticks and clicking the stick off the rim of the bodhrán – it was a sound guaranteed to get people dancing!’

A series of gigs follow across the country; ‘Reconciliation’ comes into being and less than a year later Natural Symphonies, always with its ear to the ground for the extraordinary, releases the group’s first album. A wonderful convergence of musical talents that’s one story, but ‘Reconciliation’ also represents another story – of two cultures which have preserved their identity and vitality despite long, often brutal histories of foreign oppression.

Bronze Age Irish horns (whose reproductions the group plays) have been recovered from sites throughout Northern and Southern Ireland. It is thought that many of these were buried (perhaps circa 900BC) to preserve them from foreign invaders. To make the horns sound again is inevitably to summon up the sound of a world in which the Irish people were united and free. Yet it took another equally ancient, equally proud culture to make the horns speak, the didgeridoo, a drone instrument once confined to North and North Western Australia, but increasingly the sound signature of an Australia that recognises the historical and spiritual authority of Aboriginal cultures in moulding its identity. In the hands of Alan and Phillip, the didgeridoo ranges with equal flair and facility across a wide range of Western and non-Western music styles. But its richly variable tone-colour, produced simply by altering the vibration of the lips and a changing air-flow, remains unique. Not uniquely local though – and I guess this is the point. The fact that the horns of Bronze Age Ireland were also drone instruments makes one wonder whether our familiar Western musical tradition rests on the silencing of an older – and more cosmopolitan – culture of music making.

The ancient Greeks are said to have ‘tortured’ strings to make them play tunes – as if the instruments of Western music were slaves! Is this the difference perhaps? The unstopped horn, the open-ended didgeridoo, and the hand-sized clap stick belong to a tradition of un-tortured, humanly-oriented sound. In any case, the result is a sound that is joyfully physical and spontaneous, that invites you to get up and dance. The sound of an amazing cultural convergence – this is the sound of ‘Reconciliation’.

Musically Irish and Aboriginal music-making traditions converge at a number of points. Similar rhythms, for example predominate in both traditions, including four-four time and waltz time. In addition, Aboriginal music also makes use of a sophisticated range of syncopated rhythms. Compositions are also put together in similar ways in both traditions: musical sections alternate with one another according to an a-b-a-b pattern, and the alternation of verse with chorus is another common feature. It is on this common ground that ‘Reconciliation’ has created its remarkable musical fusion.

Listen to samples or purchase the album