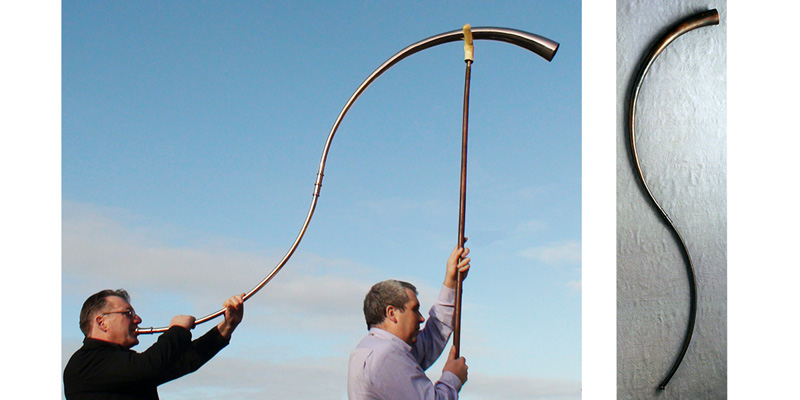 Trumpa Fáda – (long trumpet as Gaeilge). Key of B

The ‘trumpa fáda’ is the longest of the Iron Age trumpet family of Ireland and Britain. It is unusual in that two people are required to play and parade it. The bell or conical end is held up above the head of the carrier in front on a pole, while the player follows behind. It was made by John Cree in Glasgow in 2002 for a project to examine a number of reproductions of ancient instruments. Copies of horns and trumpets from antiquity were tested for their acoustic properties by Dr. Murray Campbell in the Edinburgh University, Scotland. As part of the testing, John Creed attempted to use the original method of riveting rather than welding to fashion the two tubes. The original had 1,094 rivets holding it together. It soon became apparent that this much riveting was not viable in terms of the hours required to craft it. Dr. Murray Campbell was approached for his opinion on whether welding would affect the musical properties of the new instrument. He advised that it would not change the musical properties having the tube welded together instead of rivets along it’s length. To this end the instrument was welded. After the testing, the trumpa fáda was given over to the keeping of Ancient Music Ireland. In 2016 during a detailed examination of the original instrument a comparison was made between the two. It became apparent that the reproduction was 5 cm shorter than the original instrument. Consequently, this extra length was added and the tuning on the reproduction became accurate.