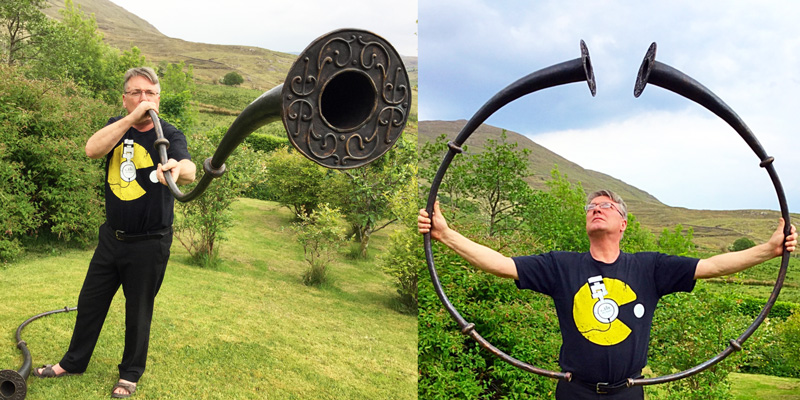 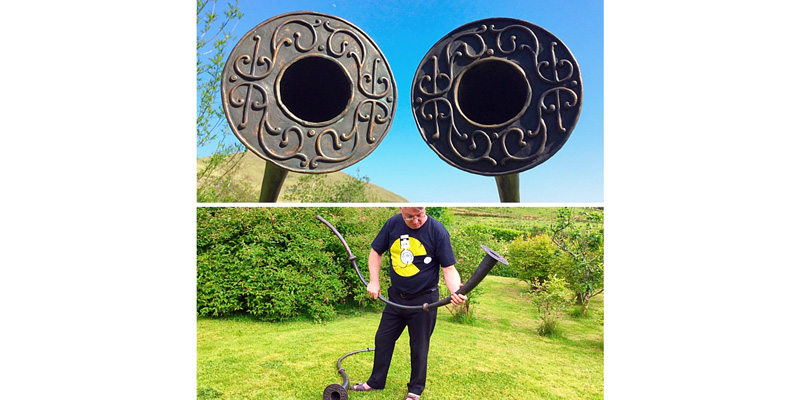 Trumpa Mór – (big trumpet as Gaeilge). Two instruments made in 2018.

An identical pair of reconstructions taken from parts of two Iron Age trumpets from Roscrea, Co. Tipperary Ireland and Anglesey, Wales were designed by Simon O’Dwyer and made in 2017/2018. By employing the original parts of the two which are very alike, the extra missing parts were created using reference to the other surviving family members. Drawings were sent to Nepal where the new pair were fashioned. The inspiration to commission a pair had also come from learning about the living traditions in Nepal and how they use trumpets in pairs today. It was decided to include circular plates at the bell end with a floral decoration as is the case with the Iron Age Loughnashade trumpet. It’s end plate functions both as a visual feature and an enhancer of the sound. Similar to a loudspeaker effect. The decoration on the Loughnashade is a La Tène design thought to represent a water lily or perhaps a lotus flower.

Taking this into account and considering that the new trumpa mór trumpets had both an Irish and a Welsh dimension it was agreed that the end plate image would be based on a fern. The plate decoration was designed by artist Derarca Cullen. When the two trumpets are help up in the playing position they form a full circle in the same way as the Nepalese curved horns or narsingra do. When played together the combined sound is far more powerful than would be expected by just doubling up. Thus the suggestion that the great Iron Age trumpets of Ireland and Britain could have been played in pairs or multiples of pairs is made more possible.

Our theories on these instruments bridge time over 2,000 years and challenge us to make whole what archaeology left for us.

Today there are five surviving examples of Iron Age Trumpas from Ireland and Wales. These are divided into three distinct types.

There are two examples of these trumpas and they are kept at the National Museum of Ireland in Dublin. One of them is a complete example from Ard Brin, Co. Down and is approximately 2.5 metres long and undecorated. It has an average metal thickness of 0.7mm. It is relatively heavy and was probably presented suspended vertically by a carrier whilst the player followed behind. Only the conical bell end remains of the second example.

This trumpa is made in two parts with a decorated plate at the bell end. It has a metal thickness of 0.4mm average. It may be sounded over the players head in either a ‘C’ or an ‘S’ position.

This Roscrea trumpa is incomplete and only comprises of a single cylindrical tube with a joining knop at each end. The Llyn Cerrig Bach example is very similar though only half of the tube survives.

Ancient Music Ireland has designed the missing parts using the surviving pieces as a guide and through comparison with the other existing Iron Age trumpas. The proposed complete instruments will be shown as drawings and photographs and prototypes. The presentation will include detailed discussion of metal, joins, manufacturing technique and other relevant aspect of all five surviving examples to demonstrate the resulting finished trumpas.